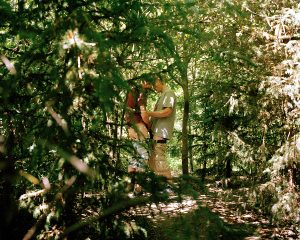 I don’t know if you meant for us readers to interpret your manifesto this way, but I’ve been deepening my contact with our environment and eliminating the many filters between my sensorium and the experience of being an animal in the world by cruising the park in the late evening instead of watching crap on Netflix. Who knew that interacting with actual human guys in a bush could be so much fun? I’m only 24, but I feel like I’ve missed out on so much already!

Anyway, despite all the fun and feeling connection deep in my soul and all that, something happened in the park last week that freaked me out a bit and I feel like I need to ask someone about it.

So there I was in the park cruising as usual, and this old guy (early 50s?) eyed me from behind a big fallen cedar. I usually stick to my own age group, but I had seen this guy get out of his big delivery truck and, well, truckers! As I followed him into the deeper bush he said, “I guess you’re following me because you want to blow me.” I was kind of excited by this, and said “I guess you’re walking into the bush because you want to get blown”. The agenda thus set, his dirty jeans were soon down and I was on my knees. He was an eager and expressive recipient, and I sought to increase his pleasure by inserting a finger up his butt so I could massage his prostate. This worked for him, to judge from his excitement. We took our time and it was a lot of fun.

We chatted a bit after, and he was an easy guy to talk to. What’s the problem, you’re probably asking, Cory.

When I had my finger in his ass, I was massaging his prostate, and on one side of it, I could feel a hard lump that contrasted with the rest of the prostate tissue. My fingers have been up enough butts to know where the gland is and what it should feel like. I’m no doctor, but I know enough to realize that this is why doctors check out what they can reach of the prostate gland this way. He didn’t seem to notice when I touched the lump, so I didn’t say anything, my focus being mostly on his cock.

After we walked out of the bush together, I still didn’t mention it, and he went and got in his truck. I was arguing with myself. Should I, shouldn’t I? Would I want to know if it were me? What is my moral duty as a gay man? A human? I decided I should tell him, and ran over to his truck. I related the news to him nervously, he looked a bit shocked as you might expect. Then he said a couple of things that surprised me. One, that his doctor had said that his PSA was high, and two, that his doctor had wanted to examine his prostate with his finger, but that he’d refused the examination! I was bewildered. I guess the doctor’s finger was scarier than mine. Admittedly the context was vastly different! My parting words were an attempt at comforting him, by saying, “It’s probably nothing, but have your doc check it out.”

Cory my man, did I do the right thing? We did exchange phone numbers — I’m also not sure I want to get involved with a guy that might have cancer. What would you do? What should I do? Help me out here, dude!

Thanks so much. I really want to thank you for your site – the way you guys think about things has totally changed my life for the better.

Ethical Slut but Afraid Too

Your question contains all the elements of a good novel: secret meetings, lust, snappy dialogue, dominance and submission, surprise, dark forces, moral dilemmas, and attempts at resolution! Well done. Your kind words about howhardcanitbe.com are going up on the boardroom wall. You have not perverted our intent in the least. Lustiness is arguably the best part of nature: a supermagnet that pulls us in all sorts of wonderful directions.

Men are both blessed and cursed with the prostate gland. Source of our juiciness, it is also very problem prone. The medical establishment is one thing, your “community volunteer patrol” is another; think of yourself as an alert and benign vigilante when it comes to the prostate gland of those you pleasure!

Our staff does not include a medical advisor (we are accepting applications), but Cory is reliably informed that prostate lumps can be nodules, calcifications, infections, or tumours benign or malignant. Even malignant ones may be so slow growing one outlives them in a natural lifespan. It’s a tangled medical jungle at best concerning discovery, diagnosis, and treatment of that pesky gland’s ills.

You did many right things and none wrong. Cory realizes that it’s not easy to deliver difficult news — that took courage. Gay men often treat each other with casual or cruel disregard, so your attitude is quite refreshing. You not only offered another man pleasure, you sought to maximize it. You talked to him afterwards rather than dismissing him because he had served his purpose. You were concerned with his health and welfare. You reflected on all the implications.

As to your reluctance to get involved with someone who might have cancer, it could help to realize that every one of us “might have cancer”. If a friend does get diagnosed, our own mortality heaves into view, and that is usually what frightens us. If you want to see this man again, regardless of the lump, do so. Trust the good instincts that have informed your actions so far.

As to following the philosophy of this site, Cory implores you, ESBAT, to shed your clothing as often as possible, rub up against nature — animal, vegetable or mineral — where you wish, and celebrate your own juiciness. Long may it gush forth! And please, don’t keep your fingers to yourself.

This site uses Akismet to reduce spam. Learn how your comment data is processed.